Must Watch Destination in Garhwal

Chila is a small Village/hamlet in Kalsi Block in Dehradun District of Uttarakhand State, India. It comes under Chila Panchayath. It is located 29 KM towards North from District head quarters Dehradun. 9 KM from Kalsi. 30 KM from State capital Dehradun

Near by Cities to Chila Mussoorie , Dehradun , Chamba , Tehri are the . 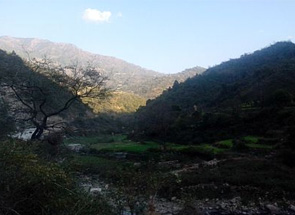 Location: 22 kms from Swarg Ashram in Haridwar Dedicated to: Lord Shiva
Significance: One of the famous temples of Lord Shiva

Neelkanth TempleNeelkanth Temple is one of the most revered holy shrines of the Hindus. Located on a hill above Swarg Ashram in Haridwar, Neelkanth Temple is easily accessible from here. The temple lies at a comfortable distance of 12 kms and can also be reached from Rishikesh. The way to this temple is surrounded by lush green hills and rivers, providing some of the most beautiful sights, one has ever seen. Many pilgrims come to this temple by trekking, which takes around 4 hours from Rishikesh. 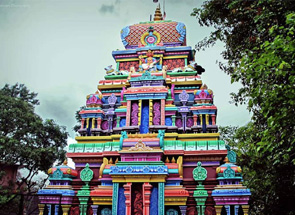 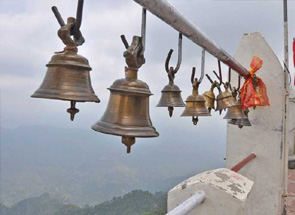 Kunjapuri Temple is situated on the top of the hill Kunjapuri 1,676m high, 7 km away from Narendra Nagar, around 15 km from Rishikesh and 93 km from Devapraya. Trek from Hidolakhal village to the temple through the green forest will be more adventurous to nature lovers. The distance is 5km. The Char Dham pilgrims can pay a visit to Kunjapuri temple on their way from Rishikesh to Gangotri.
History of Kunjapuri Goddess Parvati is the consort of Lord Shiva. In her previous birth, Goddess Parvati was known as Sati. She had married the Lord, but her father King Daksha was not too pleased. He had organized a Yagna, a spiritual gathering where offerings are made to Agni Dev (Fire God). He had purposely not invited his daughter and her husband. 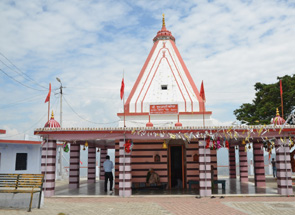 Tarkeshwar Mahadev is a Village 36 km from Lansdowne and at a Height of 1,800 m. The place is Known for its Temple Dedicated to Lord Shiva. Surrounded by Thick Forests of Devdar and Pine, it is an ideal Pace for those who Seek for Beauty in Nature. During Shivratri, a Special Worship is held. The temple committee provides a Dharamshala for Accommodation."
How To Reach Tarkeshwar Mahadev Temple Lansdowne Tarkeshwar Mahadev Temple is located at 38 kms from Lansdowne and can be reached easily by hiring taxi from Lansdowne to Gundalkhet village. From the village, temple is just 1 km ahead which can be easily trek. Nearest rail connectivity is at Kotdwara railway station (70 kms) and airport at Jolly Grant Airport, Dehradun (177 kms)." 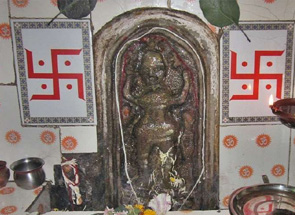 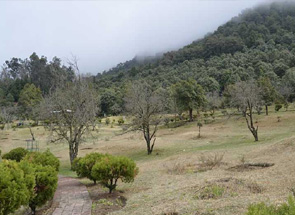 Situated at a distance of 19 km from the main town of Srinagar via Chamdhar, Devalgarh was established by the King of Kangra named Deval. The Laxmi Narayan temple, Gauri Devi temple and Rajeshwari temple are the main attractions here. Inscriptions on the stones of the temples make them important from the archaeological point of view..
How To Reach us By flight : Nearest airport is Jolly Grant, 115 km.
By train: Kotdwar (138 km) and Rishikesh (106 km) are the nearest railway stations.
By Road: It is well connected to Dehradun, Rishikesh, Kotdwar, Nainital, Almora, Delhi and other cities of the region. 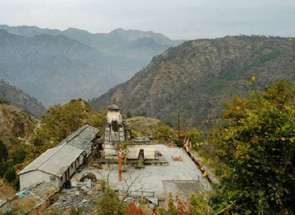 After traveling over the expanse of desert in western Kutch, you find the Koteshwar Temple, at a place where the immensity of dry land meets the incomprehensible vastness of the sea. After so much arid ground, the sight of the ocean will awaken your spirits; though the sea is even less hospitable to humans, a sobering thought.

The only point that breaks the skyline from the flat brown horizon to the east and the wide blue horizon to the west is the point of the Koteshwar Temple, the last outpost of human construction at the westernmost limit of India. Not overrun by tourists like the temple at Dwarka, Koteshwar is conducive to contemplating emptiness, pondering the place of humanity on earth (and ultimately, isn’t that what spiritual traditions are about?). 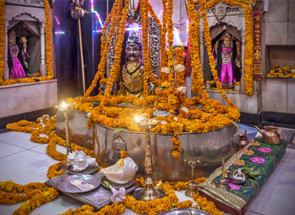 Dedicated to Lord Shiva's elder son, Kartikeya, Kartik Swami is a temple of mystic ambiance and exquisite views. The popular Hindu temple is perched on a hilltop at an elevation of 3050 m and situated near Kanak Chauri Village on Rudraprayag-Pokhari route in the district of Rudraprayag of the state Uttarakhand.
In order to reach the temple, one has to undergo a 3 km thrilling trek that starts from Kanak Chauri Village. The route of the trek is rugged but it assures astonishing verdure to relish the exquisiteness of nature. The religious site in the Garhwal Himalayas that is dedicated to Lord Kartikeya has a strong history behind it. 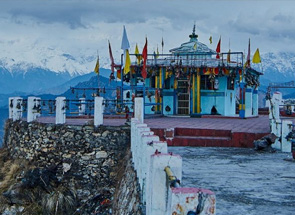 Buda Kedar, a beautiful village lying in the cradle of nature, is located in Tehri Garhwal District of Uttarakhand state of India. The Village is surrounded by steep hills covered with lush green deodar forests.
Buda Kedar which is about 60 km by road from New Tehri is well known for Buda Kedar Temple. Dotted with numerous huts and terraced fields for cultivation amidst mountainous Garhwal Himalayas, Buda Kedar gives an opportunity to visitor a glimpse into the lives of hill folk.
How to Reach By road, it is well connected with New Tehri (60km) and other important destinations of the region. Nearest railhead is at Rishikesh and nearest airport is Jolly Grant of Dehradun. 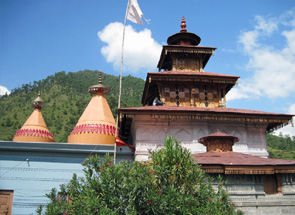 It is believed in the ancient period, the statues of Shivalinga, Shiva Parbati, Ganesh, Kumar and Devi appeared out of thin air on Barsauli VDC, ward no. 4 of Rupandehi district (now Gonaha VDC, ward no. 9, Semrahana) so the place was named Prakateshwar. According to the Buddhist literature, the shakyas state was spreaded upto river Rohini in the east so this place was also under Buddha’s father, King Suddhodhana.

Before the introduction of Buddhism, shakyas dynasty and the people followed ‘Shaiba’ religion. During excavation, images and pieces related to “Shaiba” religion was found. As there was no written evidence on the artistic items excavated, we can only have a random guess about the technology used, religious traditions and practices. The level of interest about this place piqued when Shivalinga and idol of Uma Maheshwor of ‘Shaiba’ religion was found. 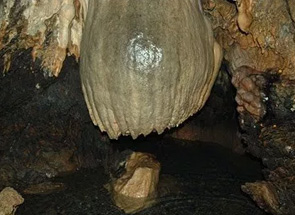 Uttarakhand, better known as the Devbhumi (land of Gods), is truly one of the most heavenly parts of the earth. One of the tales of its rich past relates to a set of five Shiva temples known as Panch Kedar, which includes - Kedarnath, Tungnath, Rudranath, Madhyamaheshwar and Kalpeshwar. These sacred sites of Lord Shiva are located in the Garhwal region of Uttarakhand.

The story of their origin is mostly traced to the Pandavas (from the Hindu epic Mahabharata). Each of the temples is placed on the most serene and unruffled parts of the Indian Himalayas. No direct motorable road goes straight to the temples. Every temple requires some amount of trekking with varying levels of difficulty. 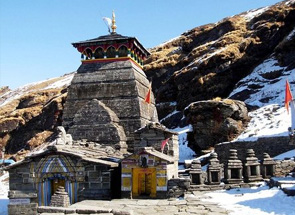 Originally seven in number, Panch Badri are reckoned to be the Hindu sacred shrines dedicated to Lord Vishnu. These temples, namely, Vishal Badri (Badrinath), Yogdhan Badri, Bhavishya Badri, Vridha Badri and Adi Badri are in fact considered the abode of Lord Vishnu and are situated in the area starting from Satopanth about 24 kilometres above Badrinath extending to Nandprayag in the south. This entire area is known as the Badri-Kshetra and is an important pilgrimage destination for both Lord Vishnu devotees as well as other people of Hindu faith. 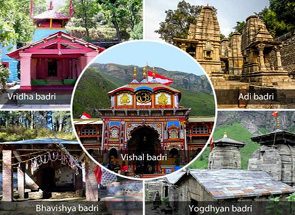 Chopta is also known as “Mini Switzerland“, and is getting popular year after year. Chopta Hill Station is located at an altitude of 2700 mts, in the Rudraprayag District of Uttarakhand State. Chopta is surrounded by dense forest, and offers majestic view of Snow Clad Himalayan Ranges and lush green meadows.
It is also the starting point of the trek to famous Tungnath Mandir (Panch Kedar Temple) and Chandrashila Summit . The Chopta region is rich in varied flora and fauna, with plenty of Rhododendron and Deodar trees all around. 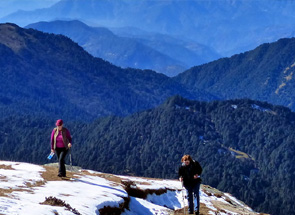 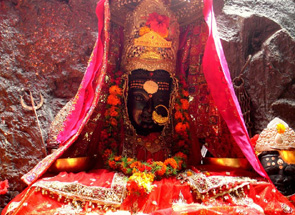 Situated at a small hill on the banks of Khoh river of Garhwal, Siddhabali Temple is a famous temple of Lord Hanuman in Kotdwara. A scenic surrounding and hill forest at the backdrop of the temple makes Sidhbali more attractive for tourists. Connected through a wide bridge to the main Pauri-Kotdwara road, Sidhbali temple is painted in deep orange color, favourite of Lord Hanuman.
Visitors have to take few stairs to reach at the premises of the temple. A beautiful decorative and sparkling idol of Lord Hanuman can be seen now. One can also witness panoramic views of the surroundings from the temple. 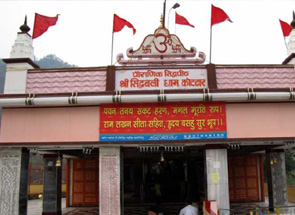 Laxman Sidh Temple is located at a distance of 12 kms from Dehradun. It is on the way to Rishikesh. The place is known for its scenic beauty. It is visited by hundreds of people in the weekend. It lies in the middle of thick forests. Laxman Sidh Temple is the cremation site of the Saint-Swami Laxman Sidh. It is noted for its solitude.
The area is devoid of any market or any house. There is nothing but the virgin nature with it's the beautiful wilderness. Laxman Sidh Temple lies very close (1.5km) to the highway. On the first right turn as soon as you get into the sal forest there is a small bridge after Harawala. 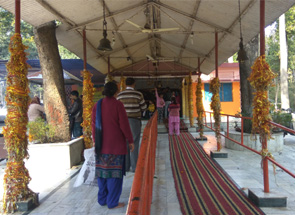 People seeking a waterfront eat-and-nap shouldn’t overlook this beautiful space. Far away from the hustle and bustle of Dehradun city nestles a picnic spot called Lachhiwala. In Lachhiwala, one can see small 4-7 feet well maintained ponds amidst the sal trees. Fresh water from the stream of Suswa River is the primary source of water for these ponds. Apart from indulging in sightseeing, here tourists can enjoy bathing in the man-made pools, trekking, and bird-watching.
There are many guest houses nearby Lachhiwala for tourist accommodation. Lachhiwal has good connectivity with the main road since it is located at walking distance from Dehradun-Haridwar Road. Tourist can hire a private taxi or hop on a bus from Dehradun, Rishikesh (35 km) and Haridwar (42 km) to reach Lachhiwal. 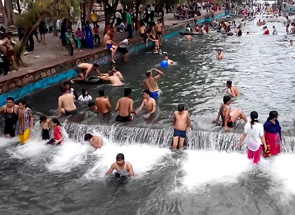 There are many places in Devbhoomi Uttarakhand, where not only the gods, but also the Asuras are worshiped with reverence. At these places, centuries old grand temples of Asuras are installed. One such place is Paithani village in Pauri district, where Rahu temple has a unique identity across the country due to its unique craft. This village falls in the Kandarsune belt of Thalisain block (Rath Kshetra).

Despite being neglected at the government level, tourists from the country and the world reach Paithani to appreciate the grandeur of this temple of Rath region. In the Kedarkhand of 'Skanda Purana' it is mentioned that Rahu had done severe penance of Lord Shiva at the confluence of eastern and western Nayar in Rashtrakuta mountain. That is why Rahu's temple was established here and it is called 'Rath' area in the name of Rashtrakuta mountain. Also, this village was named 'Paithani' due to Rahu's gotra 'Paithinasi'. 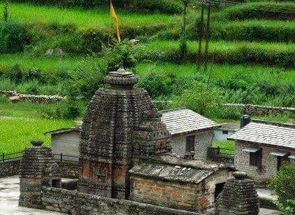